💎 What would you sacrifice in the pursuit of power? ⚪

📚 Diamonds and Pearl by K’wan 📚 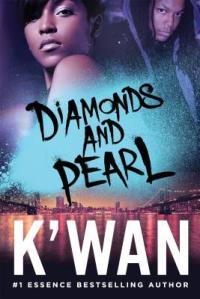 From # 1 Essence best-selling Crime Novelist K’Wan comes a tale of forbidden love, high stakes murder and the robbery gone bad that set it all in motion, Diamonds and Pearl.

They say that good girls like bad boys, and this was especially true for Pearl Stone. A child born of privilege to a drug baron and reputed killer known in the streets as Big Stone. Although the flashy, fast-paced nature of the streets calls to Pearl, she’s been brought up to look but not touch. But when a young hustler named Diamonds crawls up from the swamps of Louisiana and sets up shop in New York City, everything Pearl was taught flies out the window.

Raised in the wild and schooled on the mean streets of New Orleans, Diamonds is no stranger to hard times and is willing to do whatever it takes to stay above the poverty line, including kill. When a robbery turned mass murder goes wrong, Diamonds is forced to flee New Orleans and lands in New York where he meets Pearl, and for the first time finds something he craves more than wealth and power…love.
As the stakes get higher, Diamonds has to push away his past if he’s to grab hold of his future—but by doing so, will he show Pearl that all that glitters isn’t gold?

Note: This review is mainly for the audio book version.  Grammer and editorial issues don’t apply.

Beginning in the backwoods of Louisana, Diamonds and his crew set the stage for this page-turning thrill ride.  Growing up with nothing, Diamonds vows that he and his crew would never feel that pain again.  Concocting a plan for a come-up, Diamonds plan the heist that sets them off.  A couple of things happen that changes the course of the all their futures.

When everything you could ever desire is handed to you what else is left to concur? For Pearl Stone, the Streets is all the challenge she ever has to face.  The daughter of a supreme drug baron, Pearl makes decisions less based on common sense and more on the thrill.

I listened to this audiobook, narrated by Carey Hite. He is quickly becoming one of my favorite narrators. With clear distinctions between characters, Hite does an excellent job putting a voice to a novel.  Some of the characters, I’m looking forward to hearing again.