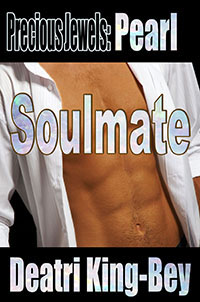 The heart of the Precious Jewels Security Agency, Pearl Nicolas’s life has become one undercover assignment after the next. Happy, yet jealous, that her sisters are finding their soulmates, Pearl reluctantly accepts there is no soulmate out there for her… Or is there?

Tariq Suárez Anzar’s life changed when he became a single father of a teen. When a possible drug ring is suspected on his daughter’s prep school campus, the Precious Jewels are called in to find out exactly what is going on. But Tariq discovers so much more—Pearl. From the first moment they met, everything within him screamed, “She is your soulmate!”

Timing would be perfect for Tariq to go after his soulmate except one tiny thing—his daughter is Pearl’s only lead in the case. Patient as much as he is determined, he will not let this once in a lifetime chance slip by to have the family he wants.

Amber had never been more right in her life! Pearl continued staring at the headshot of Tariq Suárez Aznar in the Newton Academy’s staff gallery on the school’s website via her iPad. Teachers were not supposed to look like this. Had Professor Suárez been her math instructor, she wouldn’t have learned a thing from dreaming about him all day.

Sincere hazel eyes to gaze into, strong facial features to admire, lips plump enough for kissing, short wavy hair to run her fingers over—if his body were half as nice, she’d never solve the case from drooling over the man.

Resisting the urge to conduct a background check on him, she turned off her tablet and put it away. He’d hired them and deserved his privacy. This was business. Plus a man like him had to be married. Then again, what would she do with a boring teacher anyway? Good looks be damned, she needed a man who could keep up with her. One whose lifestyle matched hers enough that they wanted to share their lives together. She wanted someone who didn’t exist—her soulmate.

That soft, sexy voice had to belong to the new star of her fantasies. Much calmer than she felt, she turned and smiled politely. “Yes. Oh, Mr. Suárez.” Following Spanish tradition, she said his middle name, which was his father’s family name.

Appreciation burned in his bright eyes as he took her in from head to toe. She knew when a man was attracted to her, and Mr. Suárez definitely was.

Thank you for giving me the opportunity to introduce Soulmate. I appreciate it and you.

Check out the previous two in the series.

Thank you for stopping by. Leave a Reply Cancel reply